What is this IPv6 Transition?

The Internet is a global system of interconnected computer networks (or a network of networks!)

Currently the Internet operates on the fourth version of the Internet Protocol (IP) and is the first version to be widely accessible and used by the public. It is known as IPv4.

An IP address identifies a specific and unique piece of hardware on a network.
In simple terms IP addresses can be thought of as telephone numbers.

Why do we need an Internet Protocol anyway?

For example, when you open a browser and connect to the Internet, you are passing through a hardware device which will contain a unique IP address. This is how your Internet session is recognised. If you enter a search term on the Google home page and press the "Google Search" button, your search term is wrapped up in a packet of information. It is then sent across the networks making up the Internet. In order that your search term arrives and returns to the right place (ie. at Google headquarters so they can provide the search results and then back to your PC so you can view the results), a sort of map is needed. This map needs two coordinates - the IP origin address (the address associated with your router) and the IP destination address (the address associated with the Google server)

The Internet Protocol is a set of rules that looks after the transfer of these packets of data. Part of the protocol is how to define each IP address, and this is currently determined via 4 sets of numbers between 0 and 255. Each number is separated by a dot. For example, 192.168.1.1 or 196.128.64.64.

When the IPv4 scheme was introduced in 1977, the potential 4.3 billion different IP addresses seemed to be sufficient. Due to exponential growth and demand, this is no longer the case.

Tell me more about IPv6

In addition, there are many enhancements buried deep within the new protocol. Advanced security, communication, layering and new protocols are just some of the improvements. Mostly this will be invisible to us but it is a definite progression for the Internet.

In order to ensure a smooth transition, there will be an overlap period where IPv4 and IPv6 will coexist as protocols on the Internet.

What does this IPv6 transition mean to me?

Hopefully the upgrade to this new and more powerful Internet Protocol will not affect you. IPv6 support is built-in to most modern computer hardware. The problem will probably not be with your desktop, laptop or phone. The problem is not even with your Business Website (there will be no change to AB Publish back office system or to the configuration of your Organisation's Internet Website!)

The potential problem is with the hardware between your device and your destination. It is the router and your Internet Service Provider's equipment that may cause problems as they may not be able to handle the new IPv6 connections.

To ensure maximum connectivity and minimal problems, most major Internet Websites will be running dual-stacks, which will allow visitors to get to the sites using either an IPv4 or an IPv6 connection.

There may be problems if your router thinks it can handle IPv6 but in reality it cannot. It will try the new and more advanced IPv6 firstly, may not complete successfully so gives up after a while and eventually trys again using the current IPv4 connection. This may result in delays.

The International Internet Society had organised a World IPv6 Day. It will occur on June 8 and is aimed for website owners, Internet Service Providers and users to try out IPv6. Some of the biggest website have agreed to take part (Google, Facebook, YouTube...) and to initiate their IPv6 during 24 hours. This will enable us to see which websites (and which Internet Service Providers) will not be able to handle dual-stack connectivity. 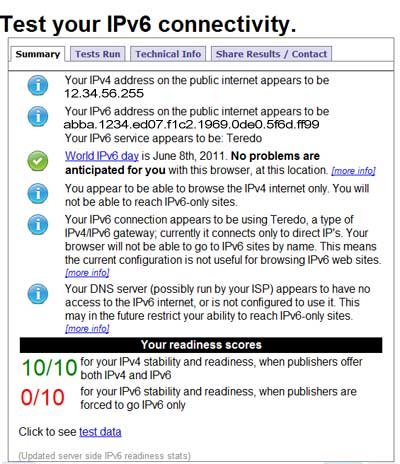